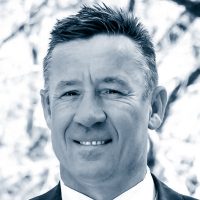 Richard graduated during 1990 with BSc (Honours) Geology (University of Newcastle upon Tyne). He then joined Anglovaal at the Sun Project (deep Wits exploration). In 1992 he moved to Lonhro’s Western Platinum Mine, where he was responsible for all aspects of operational mine geology.

Following relocation to Avmin head office he was responsible for the Nkomati expansion feasibility study, as well as South African Ni exploration. During 2002 he joined the Two Rivers Platinum Project team, managing the geological aspects of the feasibility study and trial mining programmes.

During 2005, he returned to Lonmin as Exploration Manager responsible for Southern Hemisphere Platinum Group Metal (PGM) exploration and new business. This role encompassed management of PGM, Ni-PGM sulphide, and Au projects in South Africa, Gabon, Tanzania, and Kenya, as well as evaluation of new business opportunities. During 2007, he joined African Nickel as a director and Chief Operating Officer and was responsible for the technical direction of the company.

This encompassed growing the project base of the company from the initial target generative phase, building the technical team, and progressing the exploration projects. The company actively explored projects in Angola, Botswana, Namibia, Mozambique, Mauritania, South Africa, and Tanzania. During 2012, Richard left African Nickel to set up a geological consultancy, undertaking work for African Nickel, Antofagasta and MMG. From 2013 – 2017 Richard was employed by MMG as global Nickel Project Generation Leader, a role encompassing Ni strategy, consulting to projects in Australia, Alaska and the US, new business acquisition assessment, and leading entry into projects in Tanzania, Brazil and the Fraser Range. In 2017 Richard left MMG to resume a consulting role, and has undertaken work for Anglo-American, Ponton Minerals, African Exploration and Mining Services.

He continues to provide technical consulting to Orion Minerals Areachap Project team in South Africa and Sipa Resources Uganda Limited’s Akelikongo Project. Richard is also undertaking a part-time PhD at the University of the Witwatersrand (Wits), and has provided technical lectures for the Exploration MSc courses at Wits and Rhodes University, Grahamstown.